Can the NHS build a new model while delivering transformation now?

Its over 3 months since the NHS Long Term Plan (LTP) was published. CCGs and providers are finalising 18/19 accounts, agreeing contracts and finalising this year’s cost improvement and QIPP plans. There is the usual focus on mobilising operating plans and ensuring a strong focus on performance improvement, activity management and delivering cash releasing savings.

National deadlines for the identification and creation of Primary Care Networks are fast approaching and the requirement to submit a local STP version of the LTP at the end of the summer is focusing minds. CCGs are rapidly establishing joint systemwide leadership teams and providers are beginning to move beyond the rhetoric of alliances and creating joint initiatives and discussing how they share risk.

Taken together the activities are potentially the start of some of the biggest and most significant changes the NHS has seen for many decades and if successful will dwarf the regulatory and commissioning reforms introduced through the Health and Social Care Act 2012. And yet unlike all the NHS reorganisations we have seen and been part of over the last 30 years this one is beginning to happen in the absence of legislation, political pressure and top-down detailed guidance (mostly).

Structural upheaval and its impact

The last set of major NHS reforms brought in in 2012 highlighted the significant upheaval caused by major organisational restructuring and its impact on operational performance, financial control and quality of care provided. This was despite the significant enabling investment, a top-down directed process and little direct change to how providers operated.

Fast forward 7 years and it could be suggested that the NHS is attempting to make more radical and fundamental changes and at a time when it is in more vulnerable than ever with 32 of the 44 sustainability and transformation partnerships reported as having a financial deficit in 2017-18, demand for services increasing exponentially, significant concerns regarding the morale and availability of the clinical workforce and the impact of Brexit as yet unknown.

However, the case for change is well known and supported – it is to create a new model which helps improve strategic planning, better integrate and standardise services and consolidates and focuses its scarce leadership capability to drive much greater productivity and therefore NHS sustainability.

It is now widely agreed that the NHS must change and adapt to be sustained but the question remains how to make this happen in a way while still transforming services, keeping the show on the road and ensuring patients remain safe. 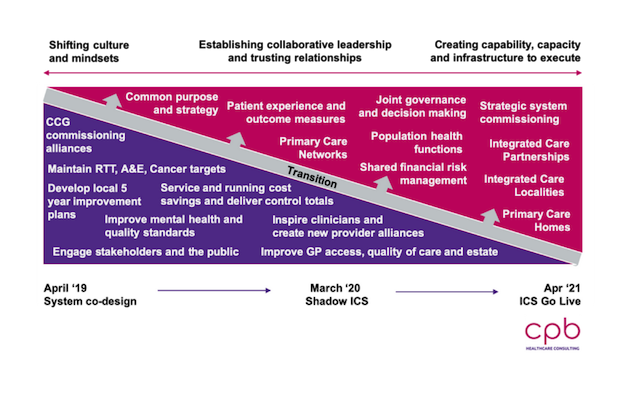 The proposed scale of change is enormous and the timescale is heroic. Every part of the NHS is going to be affected in a fundamental way.

At a national level, the coming together of NHS England and NHS Improvement is likely to have profound effects not least in terms of consistency of message from the centre. The reform of commissioning will transfer macro functions upward to a more strategic level covering larger population footprints while micro commissioning activities will be assimilated within the new provider and/or place models. All providers will need to adapt and think differently about how they collaborate and share risk with and between each other with renewed energy focused on delivering better care for the patients they serve and less on how their organisation competes and wins. All of this is envisaged to happen and be operational in less than 24 months and by April 2020 when new Integrated Care Systems are formally established.

Many systems are rightly embarking on the journey by bringing leaders together to lay the foundations for change – agreeing on a common purpose, aligning core values, developing ways of working and mutual trust while drafting high-level roadmaps and development plans.

The real building work will start in the next stage when system leaders agree how they use their collective capacity and capability to incrementally but rapidly establish the new commissioning and provider models and in parallel continue to deliver ‘business as usual’ through agreed operating and transformation plans.

Both activities require different but complementary skill sets and will need to be aligned and synchronised so they work in tandem to manage and deliver the required changes.

Establishing a small system-wide ‘transition’ function with highly experienced and capable individuals dedicated and responsible for enabling the smooth and timely transfer of responsibilities, control and management of risk and to ensure orderly change will be critical.

Best wishes for your journey! 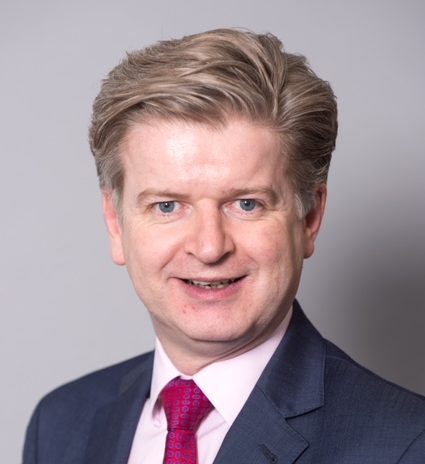 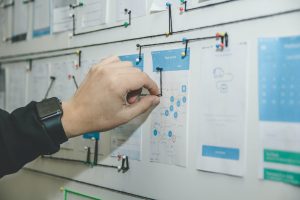 Time to get connected. The revolution in healthcare planning starts now

Planning is surely one of the most important things within healthcare – from the millions of decisions made by individual staff every day through to long term policy decisions. 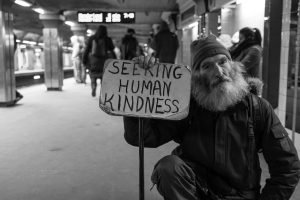 The desire to tackle available, unfair and systematic differences in health has acted as a guide and conscience through my career in the NHS. Sadly, however, as emphasized in a range of recent national reports efforts to reduce health inequalities have been outpaced by societal change, to the point that many regional and socioeconomic differences in health are growing. 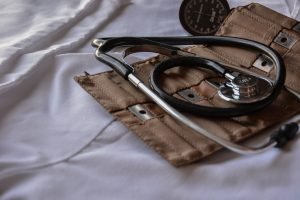 Restoration, recovery, reset, reform, a reformation, a renaissance? Personally, I like renaissance, as the challenges ahead present the opportunity to give birth to a new, and hopefully fully integrated, National Health and Care Service.